For such a relatively small studio, Thunderkick has a very strong reputation in the online slots industry with both players and operators alike.

Their games can be found at some of the top online casinos in countries all over Europe including the UK, Germany, Czech Republic, Malta, and the Netherlands, and the list of brands working with them is growing all the time.

This Swedish based independent game provider has been slowly but surely releasing titles since 2012, all run on their very own remote gaming server and all created by a team who go to great lengths to prove that they really do care about their products.

Autonomy is an important part of who Thunderkick are, and although they work with plenty of other companies they develop every aspect of the games themselves in house, employing a small but dedicated team and working from their offices in Malta and Stockholm.

They could probably be considered one of the original 'new breed' of slots developers back when they started, but more than a decade on they still come across as a young innovative studio despite now being time served.

Perhaps this gives them the best of both worlds; a sterling resputation and track record, as well as the energy and excitement of a brand new studio with stars in their eyes.

What Kind of Games do Thunderkick Make?

This is a game studio with one passion and one passion only – slots. They don’t have even a single table game or scratch card, and seem to have no interest in exploring these other avenues either.

With a focus just on slots then, Thunderkick can really hone in on the games they make, and although they cover a wide variety of themes and gameplay features, you can often tell a Thunderkick game by how creative and unconventional they are.

These guys are masters at gamification, creating slots that do far more than just spin reels and create paylines.

The graphics are always fantastic, and even though they tweak their style to suit certain games, on the whole you can expect smooth fun visuals with plenty of animations both in the backdrops and on the reels themselves, in the way of animated symbols.

Games like Flame Busters, set in 80s video game land, and 1429: Unchartered Seas, which is set on an olde worlde map, do break from the norm here but this is to serve the game in question. The graphics are no less impressive, they just take on a very specific style.

Their volatility, range of game features, and maximum payouts are equally varied, and you can get a good idea of what we mean by looking at the following table:

This represents about 1/5th of their portfolio and shows the sort of range on offer in a few different areas.

The inventiveness with which otherwise every day elements of the games occur are another hallmark of Thunderkick and their unorthodox design process. 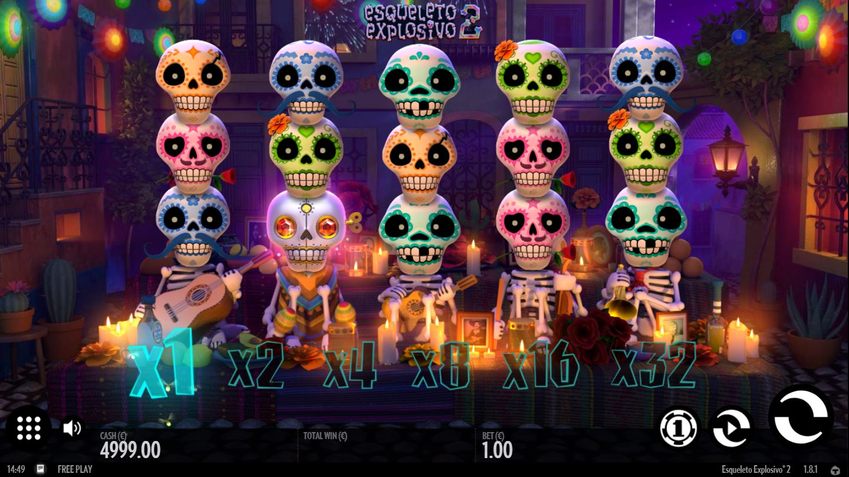 For example, in Esqueleto Explosivo the reels are created by stacking skulls on top of 5 members of a mariachi band, and instead of spinning away for the next game they tumble forwards and can be heard clattering on the ground as the next symbols land. In Birds on a Wire the birds (which are the symbols) fly off, and winning combinations are electrocuted rather than simply being removed.

This is the sort of attention to detail that can be expected, from a company that tries to make every second of each game as entertaining and in-keeping with the theme as possible. 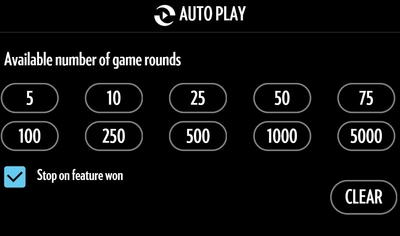 Another thing that stands out about Thunderkick games is the game interface and the options included within it.

The design is forward thinking and gives quick access to game functions like auto spin and stake levels, while keeping everything else that might take you away from the game under other menus away to the side of the screen.

This makes it super easy to adjust gameplay options without breaking your stride, and keeps everything else together neatly.

It’s possible to turn off the sound with a single tap or click (very handy in certain real life situations) and without having to go into a settings menu, but you can also configure other aspects that aren’t always typically available.

For example when playing on mobile you can toggle vibration on and off from the game menu, or open up your session history to track your progress.

Thunderkick began life back in 2012 when the online slot industry was more or less run by a handful of developer giants who had the market tied up.

Competing with the likes of Playtech, Microgaming and NetEnt was not a task many people would have taken up back then, but the small group who started Thunderkick – who were actually ex NetEnt employees – believed that this actually gave them an edge.

Their ability to be nimble and build games with more attention to detail than these older more established video slot production lines would be their USP, and their strong belief in gamification made their slots stand out.

After gaining licenses in the UK and Malta in 2013, they got their first leg up when Unibet spotted their potential and signed a deal to host Thunderkick titles on their website. Being an online casino with an international player base, this did wonders for the small game studio’s reputation by allowing a wide range of players easy access to their games.

From this point things began to snowball, as further partnerships with the likes of SoftGamings followed and a number of awards were won:

The company have not been tempted to change their core beliefs however, sticking to the plan of creating truly unique slots (no skins here) and taking the time to get them right, rather than rushing games out to quickly grow their portfolio.

There are now around 50 people working for the firm, and around 50 games in their library, which will likely grow steadily, and with stability, but always with real care and attention. As they say themselves; “sure we have made some bold decisions and failed a few times over the years, but we refuse to let assumed truths and foregone conclusions dictate what we do.”