Playtech are the largest publicly traded online casino software company in the world. They have a presence in over 20 markets with over 5000 employees in 17 countries, of which 85% are software developers. The company were established back in 1999 and are based in the gaming software powerhouse of the Isle of Man.

The Playtech brand is possibly the most well-known by virtual casino game players in the UK. The company provide games for some of the industry's biggest names, including Coral, William Hill and Ladbrokes and this has helped them establish themselves with customers globally.

Famed for the sheer volume of quality games available, over 600 titles and more variations, and with licences to produce games form DC Entertainment and others they own some of the most attractive brands and themes in the industry. Available through instant play via mobile and all other platforms and devices anyone who has played online casino before will likely have played a Playtech game. Below are some of our favourite casinos with Playtech games, further down you can read more about the brand.

Playtech have over 600 casino games at any one time with around 50 new games released each year. However, rather than ending up with a sprawling catalogue Playtech also discontinue older and less popular titles to keep the game play fresh and new for users without becoming overcrowded.

Playtech are perhaps most famous for their licenced themed titles from the likes of DC Entertainment that gives us titles such as Gladiator, The Matrix, Superman, Justice League, Robocop and their famous Batman slots, to name but a few. Like the other big three software providers Playtech offer all games types from the usual slots and table games to live games, jackpots, mobile games, bingo games, and more.

In recent years the company have been switching their games over from Flash to HTML5 giving a far higher quality of gameplay that is less prone to crashing.

The best feature of Playtech games is the graphics, we don't think any other software provider can match them across their games portfolio. This is coupled with some of the best story lines you will see in casino games, some of which are incredibly captivating.

Playing games with Playtech isn't just about spinning wheels or playing hands there is far more depth to their products and I think this is what Playtech fans love about the brand. The fact that the company also discontinue as many games as they release keeps their catalogue fresh with up to the minute design.

The instant play casinos provide up to around 400 games, depending on the casino, with around an extra 200 titles that used to be available through the download casino. The download is casino is no longer available so these extra games are mostly lost, although some may be reworked and made available for instant play.

For those slots that are still available the game play is supreme. All in all you can expect to get access to around 300 slots, around 100 table games and variants, 20+ live games and the rest of the library made up of special feature titles.

I think it is safe to say that Playech provide more jackpot games than anybody else so if you like the idea of the big win Playtech casinos would be a good place to play. At my last count there were nearly 90 progressive jackpot titles available, all thoroughly developed with their own unique story lines and features.

Below are some of Playtech's biggest jackpot titles: 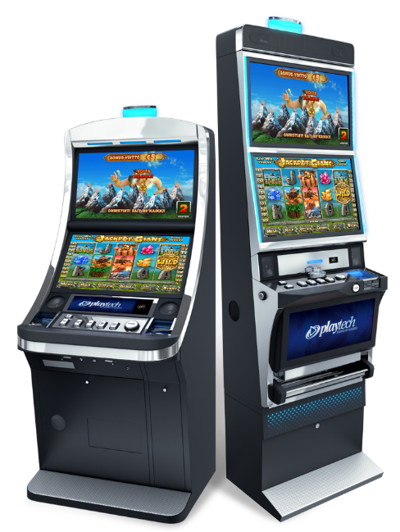 If there is a source of revenue in the gambling world then Playech have a division for it.  They offer everything from virtual sports and sportsbook platforms to lottery and real-world retail games. The company have achieved this diverse portfolio largely through strategic acquisition of specialist companies.

Playtech also offer a completely integrated package to operators called 'Playtech One' which is a self-contained platform that provides litterally everything a betting company could want or need, Here is a basic summary of Playtech's reach:

There are around 250 online casino sites that host Playtech software. Of course whereas Playtech are a great company not all online casinos that host them are, we have a recommended list at the top of this page if you would like to play with a fully licenced reputable casino provider.

For me Playech are the Apple of casino software, every game and feature is neatly packaged removing any technology barriers between the software, the casino and the user. I think this is why Playech have become the most popular brand in recent times, the usability and functionality is so easy and simple their games attract a huge demographic of players.

Having played thousands of casino games I can tell you that Playtech, for me, offer probably the most reliable software. Games are so well developed and tested that you rarely see glitches and almost never see a crash. Even when there are issues I notice Playtech titles are have far less downtime compared to other providers. Again in testament to Playtech's philosophy of maintaining around 600 games by retiring older titles gives the company the ability to appropriately maintain and support their existing catalogue, further reducing errors.

Playtech do not have the widest coverage, Microgaming games for example are provided by almost double the number of casinos. What they do have however is some of the biggest online casino sites on board, the likes of William Hill and Coral. I tell you these guys will only feature the very best and most dependable software packages. You don't have to have the biggest catalogue to be the best.

Playtech was co-founded by Israeli and London businessman Teddy Sagi in Tartu, Estonia, in 1999. He brought in a group of entrepreneurs from the casino industry and software industry to establish a world leading international game software design and development company. To say he succeeded would be an understatement.

The company were in no rush to get to market preferring to focus on delivering quality from the outset. After two years of fact finding and market analysis they finally applied for their first casino licence in 2001 with City Club Casino. The company grew progressively over the next five years adding live casino, bingo, poker (iPoker network launched in 2004), land based games as well as other products to their portfolio.

Strong early investment and a business model to get things right rather than rush meant Playtech went from strength to strength and were loved by early adopters. Despite their main rival, Microgaming, having been around five years earlier than Playech it was Playtech that were first to float on the London AIM stock exchange in 2006 at a value of around £550 Million. In the same year the company also attained licences with the Remote Gambling Association (RGA) and the Alderney Gaming Control Commission (AGCC).

2006 was also a year that hit Playtech hard as the Unlawful Internet Gambling Enforcement Act in the USA effectively outlawed online gambling and casino. This saw over 40% wiped from the newly listed company overnight. In the online world however you can never afford to sit still and so Playech continued forged forward into other territories and by 2010 had penetrated into markets including Italy, Spain, Estonia and Serbia an Bulgaria.

Playtech already had some seriously big partners on board at this stage including Bet365 and Betfred and in 2007 when their iPoker network became the world's biggest other operators started to come knocking and 15 new brands began hosting Playech games and features.

In 2008 Playtech acquired their first major licencing deal with Paramount pictures allowing them to release themed content, such as the Gladiator game series. This started a new theme for the company of designing and hosting branded games and this has proved hugely successful. The following year the company also launched a deal with Marvel for a branded series of slot games and on the back of this Playech struck deals with two more giant operators, William Hill and Betfair.

In the second decade of the 21st Century the business model changed again as the company set about acquiring new entities. In 2010 playtech acquired Virtue Fusion creating the worlds biggest bingo network and in the same year achieved the International Company of the Year at the AIM awards, a very prestigious award.

Today Playtech employ over 5000 people in 17 countries and with head offices in the Isle of Man and other offices in Bulgaria, Cyprus, Estonia, Germany, Gibraltar, Israel, Latvia, the Philippines, Russia, Sweden, Ukraine and the UK.

It is safe to say Playtech are one of the biggest, most respected and loved casino games software providers in the world. Anyone who has played online casino with a few sites will have played a Playtech title along the way. With a back huge catalogue, amazing partners (both casinos and brands such as DC) and new games and features all of the time it's hard to see anyone kicking them off their perch any time soon.

Playtech have won so many awards now that I won't even attempt to list them all, here are some of the more recent ones: