If you want an example of a small game studio disrupting the industry and giving the big names a fright, look no further than Big Time Gaming.

Often referred to as BTG, the slot developer rocked the apple cart somewhat when they came up with the Megaways mechanic that proved so incredibly popular with players; so much so that it is now licensed out to countless other developers to use on their games as well.

This really launched BTG into the spotlight, with the small Australian developer becoming the talk of the town, and they have been going great guns ever since.

Only in operation since 2011, the company is nevertheless fronted by three stalwarts of the slot gaming world, one of which, Nik Robinson, founded a company called New Tech Media back in 1996, which eventually ended up as part of OpenBet.

In many ways this is a simple software developer. They mostly create slots, they don’t really dabble in table games or live casino apart from the odd one or two, and they don’t offer any platform services or have B2B sidelines (not in the regular sense anyway). For such a small and simple game studio though, their impact on the whole industry has been immense.

All About Big Time Gaming’s Slots

Despite not being the size of companies like NetEnt or Playtech, BTG manage to secure a large chunk of market share with their titles. They don’t release games often but, and given their new found fame their releases are anxiously awaited by fans and with high expectations too, so coasting is not an option. This means all of their releases are very well thought out and designed.

They like to make their slots pretty volatile compared to a lot of other developers, but the payout potential balances this out and, unlike with a lot of games that promise the earth, BTG’s slots have previously paid out at their maximum levels.

In terms of visuals the company don’t seem too hung up on this element, preferring to focus on their gameplay and maths models instead. That isn’t to say the games don’t look good, they do, but BTG isn’t one of those developers that tries to wow players with flashy graphics.

Of course, we can’t get too far into this article without mentioning their most famous invention which is a factor in many of their games – Megaways.

The Megaways engine was a real game changer when it first burst onto the scene in 2016, although the first slot it was used on, Dragonborn, wasn’t the one that made it famous. That honour goes to the one and only Bonanza.

The engine really turned the idea of reels and rows on its head, by adding a sixth reel and allowing symbols to land in different sizes, up to 7 per reel. There are also no paylines, which creates a mammoth number of winning opportunities on each spin.

We have a whole article on how Megaways works here, so we won’t cover it in detail again on this page, but with over 117,000 potential ways to win on each spin you can understand why players went crazy for it.

Megaways can create such an exciting atmosphere that these games became incredibly popular with slot streamers and their viewers, watching and waiting for a big win. This was another element that helped propel the games to stratospheric levels, as viewers went on to play the games themselves.

That said, BTG don’t incorporate Megaways into all of their slots, which proves that they are not a one trick pony or simply relying on a lucky break, but it is now available on over 100 slots thanks to other developers paying Big Time Gaming for the privilege of using the engine on their own titles. 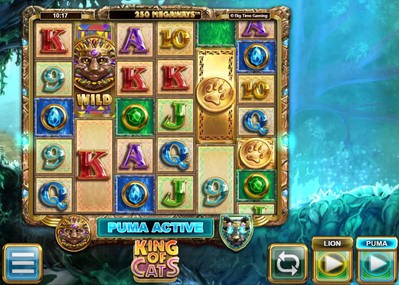 Another of BTG’s innovations came about in 2021, and is known as PlayerSelect. This is a classic case of it ‘does what it says on the tin’.

A game utilising this mechanic is effectively two games in one; with different backdrops and graphics and even different game features, but with both games being playable interchangeably from the same screen.

Players can even switch between games one spin after the other as there are two spin buttons, one for each game. This does not interrupt gameplay as the graphics for each game fade in and out and the maths model changes behind the scenes instantly.

Both games will be related, and the first to feature this engine is a good example of that, King of Cats. In this game, players can choose between Lion spins and Puma spins, with differences in how wilds behave and what happens in the freespins round being the main differences between them.

It hasn’t set the world on fire in the same way as Megaways, but to be fair, nothing is likely to; it’s a bit like being Brad Pitt’s brother (Doug Pitt, for real, check it out), it’s going to be hard to match up. Nevertheless, it’s another example of BTG pushing the boundaries of what is possible.

Arguably, Big Time Gaming is behind some of the best slots ever made. This is certainly an opinion held by many players who almost religiously play their games, and many play the same ones over and over.

These are the titles you will see showcased on the home page of many online casinos, because they know these games will get attention.

BTG might not have a huge number of games to their name, but a large proportion of them are solid contenders for your play time. 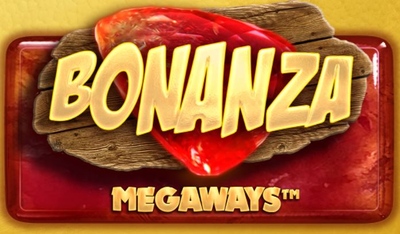 This was the game that changed everything for BTG.

With a gold mining theme, 117,649 ways to win, and the potential to payout more than 10,000x the stake, this late 2016 release went down a treat with players intrigued by the new mechanic.

On the face of it, if you ignore the Megaways engine this is a pretty simple game, with regular wilds and scatters in order to access the freespins round. So why did the game blow up like it did?

The secret to taking home the riches is with the uncapped multipliers available in the freespins round. Each winning reaction will up the multiplier by 1 and it can keep going and going.

Bonanza is still one of the most widely discussed games on player forums. 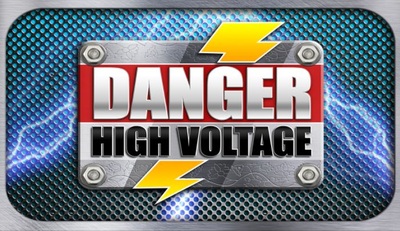 High Voltage it may be, but it is even higher in volatility. This is one of the most volatile slots BTG has ever produced, and those who play for thrills absolutely love it.

It is not a Megaways game despite being released in 2017, but the payout potential is still massive, standing at over 15,000x.

This is achieved in the freespins rounds (there are two, the player chooses which one they want when triggered), which can give out multipliers of up to 66x. Freespins can also retrigger, meaning that technically infinite freespins are a possibility.

The base game is pretty exciting with the two wilds, but a lot of the entertainment value comes from the soundtrack as well. This is a disco rock slot after all, and it is named after the Electric Six song that plays during freespins. 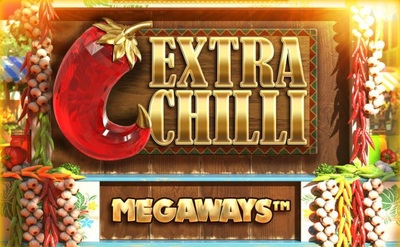 One of the interesting things about this game, and what makes it different to it’s predecessor, Bonanza, is that there is a gamble feature associated with the freespins round.

If you manage to trigger freespins by landing 3 or more HOT symbols, you can gamble them for a 50/50 chance to win more. You can do this more than once too, with the odds changing to 60/40 in the player’s favour after the first gamble.

The theme is a fun Mexican street market with mariachi music in the background along with background chatter and some entertaining characters yelping and whistling along.

Some people call this slot Bonanza 2 and it is similar, but it is also a great game in its own right that is packed full of excitement and huge potential wins of up to 20,000x. The RTP is a little better too at 96.19%. 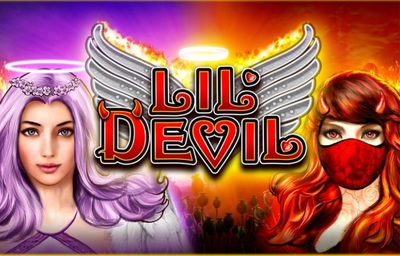 With just a 10p minimum stake and 4,096 ways to win on each spin, Lil Devil was a hit with player of all pockets as soon as it was released in 2019.

It’s not a Megaways slot, but has some similarities what with the 6 reels and the fact that there are no paylines – players just need to land matching symbols somewhere on each reel without a break in order to be paid out.

Another nice touch is the way scatters and freespins work. There are two different bonus rounds which can be triggered by landing 3 scatters. So far so normal. But all those annoying spins that land 2 scatters but not a third are actually useful here, because 2 scatters award a heart. These are collected until you have 40 of them at which point you trigger the Heartstopper Enhanced freespins round.

This all makes the game super fun to play, and with a max win potential of 36,800x there is plenty of incentive to keep players spinning. 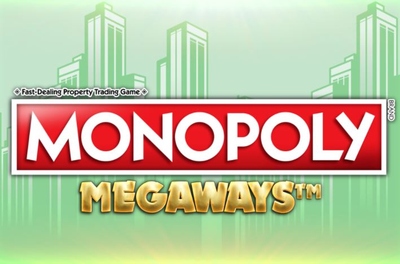 Probably one of the most complicated games in BTG’s arsenal, but also one of their most well loved and well known, is Monopoly Megaways.

The team have done an exceptional job here, creating a thoroughly engaging and immersive slot that has the theme woven in perfectly – plus great graphics and music too. Mr Monopoly himself is even present, running across the board in relation to the results of each spin, and making the game multi-dimensional.

There is way too much to cover in a few short paragraphs, but one nice addition is the ability to guarantee Max Megaways on your next spin. This comes up quite a lot from landing on chance for example, and ensures that the following spin will show 6 reels with 7 rows.

Houses, freespins, win multipliers, train stations, wilds and utilities all come into play here making Monopoly Megaways so much more than a basic game with a themed skin.

The max win is lower than usual at 14,700x, but the volatility is lower than most BTG games so each play session is action packed, and the RTP of 96.5% shouldn’t put anybody off.

Although formed in 2011, the people behind Big Time Gaming go back to the dawn of online gaming. Their CEO, Nik Robinson, ran one of the first companies to experiment with browser based gaming, New Tech Media, back in the 90s, so their pedigree is notable.

The company’s rise to fame seems fated when you look back at the way they started. The initial concept was to create slots that paid out huge sums without featuring jackpots which, back in 2011, was considered avant garde.

This ambition is what led to Megaways, which is in turn what gave the company the platform it needed to become one of the world’s top game providers.

Their popularity gives them a strong bargaining position with casinos who all want to feature their games, and as a result their newest offerings are often released exclusively to begin with – no doubt for lucrative deals – before going on wider release.

As evidence of the playing community’s fondness of them, in 2017 they won best new slot for Bonanza by a landslide in the Casinomeister awards, which is voted for by players. Another of their games, Danger High Voltage, came second. This is pretty good going considering they only released 3 games that year.

The company now has around 50 employees and is based in Sydney Australia, and a £389 million acquisition by live gaming giant Evolution Gaming will no doubt put them in a strong position for further growth and expansion.