How To Play Live Craps

This guide is specifically about playing craps in a live casino as opposed to in real life or via an RNG based game. Therefore, we will assume you already have an understanding of how to play the game.

If you don’t, we have an article on how to play craps here which you should read first.

Like all live casino games, live craps is essentially exactly the same experience eyou would get if you played the game in a real life casino, with real dice, a real table, and a human ‘dealer’ running the game.

To ensure impartiality the dice are thrown using a mechanical throwing arm so the dealer is more of a presenter in this case, but the rules of the game are not affected by the live element.

Some of the gameplay from the player’s point of view is different because bets are placed using software rather than by placing physical chips, but there isn’t much of a learning curve to this as the interface is very user friendly. 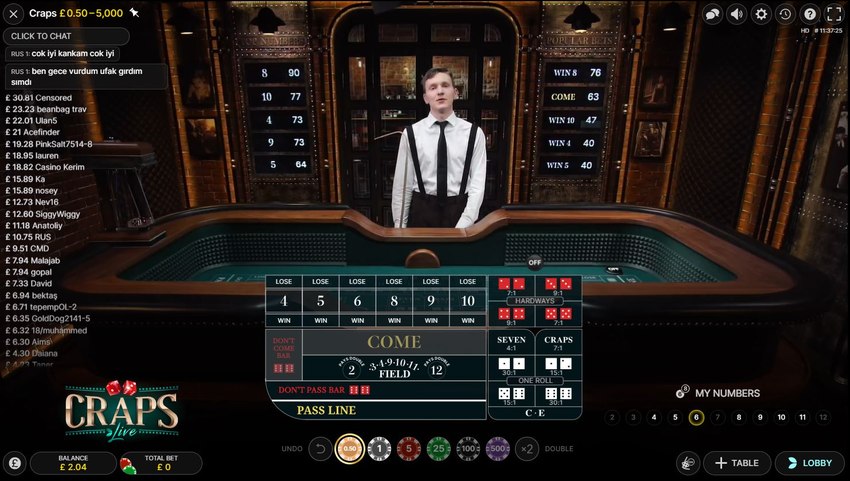 Since craps is a game that accepts bets at various different intervals, when you load the game up you might join the game at a number of different stages.

However, the image above is more or less what you will see before the start of a new game.

The only area you really need to pay attention to in the beginning is the betting board and chip denominations. This is where the betting action will be taking place from the player's point of view and where bet amounts are controlled, although of course the real action is taking place is the studio where the game is being filmed. 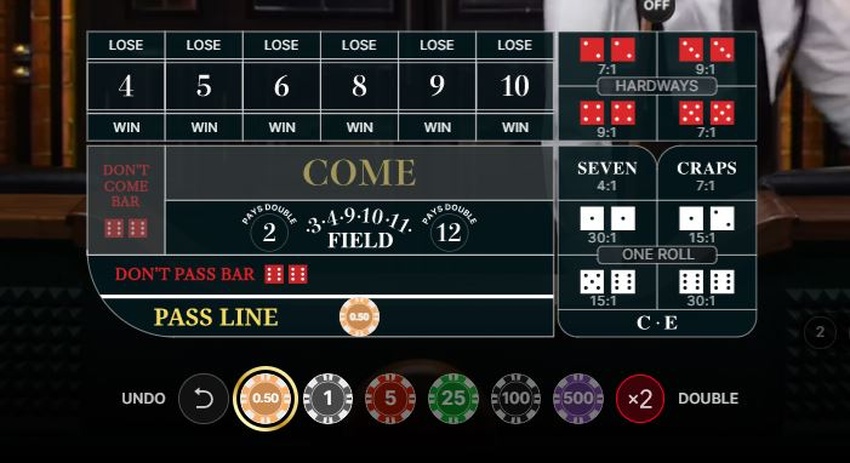 First choose your stake amount per chip placed by clicking on the appropriate area of the board. Each click will add one chip.

We have bet 50p on the pass line in the above image, but the amounts available are as follows:

Then, while betting time is open you can start placing bets on the board. Betting time is indicated with a countdown timer and only lasts about 15 seconds, so you can’t take too long making up your mind.

The betting process works in the same way for every stage in the game, so should the first roll establish a point, then the betting board will open up again and you can either ride it out or bet again.

The board does help you out here too, because any bets that are not currently available - such as a come bet at the start of the game - will be faded out to indicate what stage of the game is currently in play.

The point marker is a physical object on the table which will be moved by the dealer when appropriate, but it will also show up digitally on the betting board so that players are 100% clear on the state of the game as they place their bets.

Obviously, in a live casino there are no players physically at the table, so there is no one to shoot the dice.

This has been solved with the use of a mechanical arm that has been precision tuned to throw the dice against the back wall, from where they can bounce back and roll.

The ‘dealer’ is the one who places the dice in the shooting device, but this is shot in a close up angle so players can see that no funny business is going on.

This ensures fairness and impartiality.

The dealer will act as the stickman too, and collect the dice after each roll.

Other Parts of the Interface

You will see a column of numbers either side of the dealer; these are the popular numbers and the popular bets, basically indicating what all of the other players are betting on.

It updates in real time but has no impact on the game – you can use it as ispiration or just ignore it.

You will also see the biggest winners and what they won scrolling up the left side of the screen after each roll, as well as a chat box above that which you can turn on or off.

This is how you communicate with the dealer if you need or want to.

The only other area of the interface that might not be self explanatory is the My Numbers area.

This is something of a quick bet option that will place a chip on all areas of the board that would result in a win if your selected number was rolled.

For example, if you you chose 6 as your number, the game would automatically place a chip on the number 6 to win as well as on double 3. If you picked number 9 you would be betting on 9 to win as well as the field.

What’s the Difference Between Live and RNG Craps? 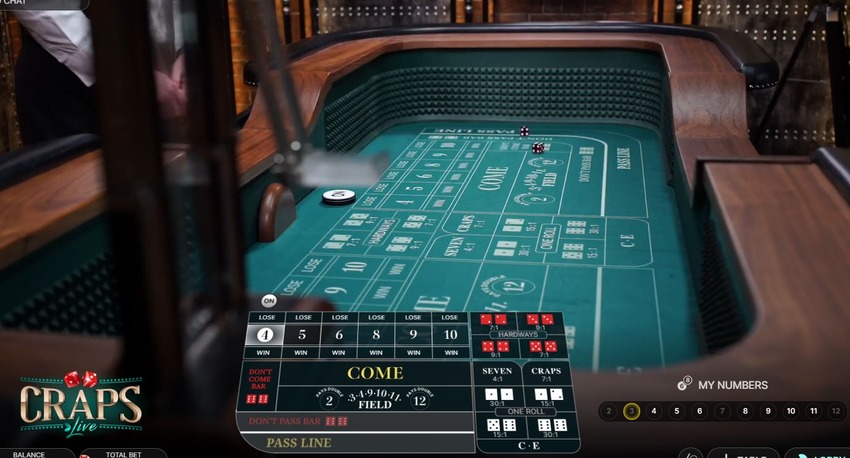 Just like other live games, the major difference between RNG craps and live craps is that live craps is being played for real and the outcome is decided by chance or fate or whatever it is that you believe in.

With RNG craps the outcome of each roll is decided by the RNG engine at the start of the game.

In terms of gameplay RNG craps is a better option if you are trying to learn the game or you are trying a new strategy, as you can play at your own pace. With live craps the speed of the game is dictated by the betting time countdown – the dice will roll whether you are ready or not.

RNG based games do offer more scope for variations but there’s nothing to stop a live casino provider developing a version of craps with additional features – not that this has really been explored so far in either form, but there is potential.