How to Play Live Baccarat 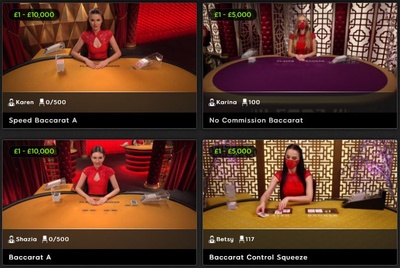 Perhaps surprisingly, baccarat is actually the most widely played casino game in the world. Despite the likes of blackjack and roulette being more prevalent in the West, Baccarat is absolutely huge in Asia and this gives it the global edge.

It is often called a game for ‘the thinking man’, although it’s not a very fitting title, because the player has absolutely no control over what happens so it is a misleading nickname to say the least,

While many believe that the game hailed from France, like many other gambling games, baccarat can actually be traced back to Italy around the 14th century when it was known as ‘Tarrochi’. It is said that this ancient game formed the foundation for the creation of the modern game of baccarat, however, there is no solid proof of this other than there being a lot of similarities between the two.

They could never have imagined live baccarat streamed to a computer screen back in the 14th century of course, but that is what we are focussing on today. Baccarat is a simple game, but if you have never played before then you might want to read our article on how to play baccarat as we won’t be covering the basics here.

Anyone who has played live casino before will be familiar with the interface they see before them after loading live baccarat, but there are some different options here as well specific to the game.

The version we are using in this guide is by Evolution Gaming, but any other developer’s game will look very similar.

Baccarat is a fast moving game, and each new round at the live casino begins with betting time.

This lasts just 15 seconds, but given that you basically have a binary choice to make (betting on the tie isn’t advised) it is plenty long enough.

You can choose your chip value by clicking on any of the chips in the semi circle, before clicking on the area of the board that you want to bet on. We have selected the minimum bet of £1 and then bet on the Banker to win.

You can see a few extra options on there too. These are side bets on either the player or the banker being dealt a pair, and they pay out at better odds because the likelihood of them coming off is smaller. You don’t have to use these, and unusually for casino side bets you can choose to only bet on these options without betting on the main game if you would like to.

You can also see what other playersin the room are doing and how much money is on the table.

Once betting time is over the betting area will shrink back and you will be unable to bet. The dealer will then draw the first four cards before the camera goes into a close up as they are revealed. 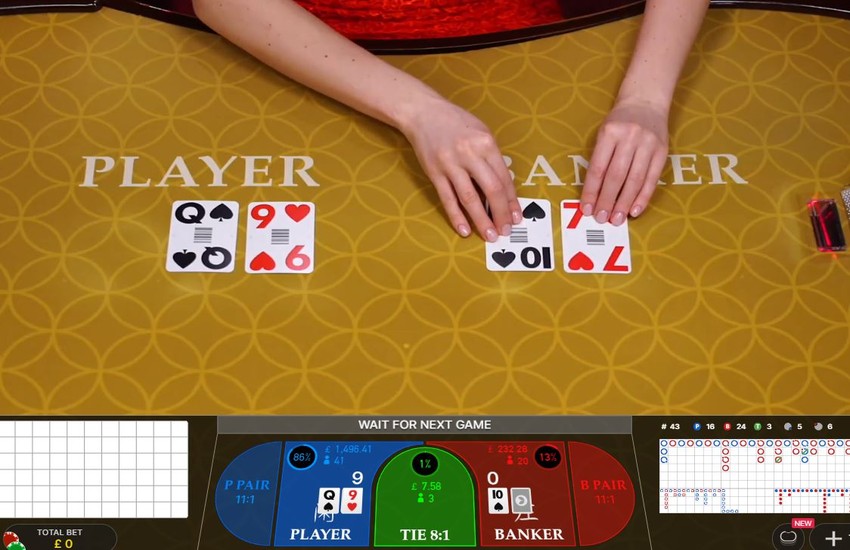 The results also show up on the betting board so you can keep track of what the score is, and if any new cards are drawn this score will update instantly.

At the end of the game the winner is announced, winnings are paid automatically back into your betting account, and a new round begins.

The whole process takes no more than a minute, and often less when a win occurs without further cards needing to be drawn. 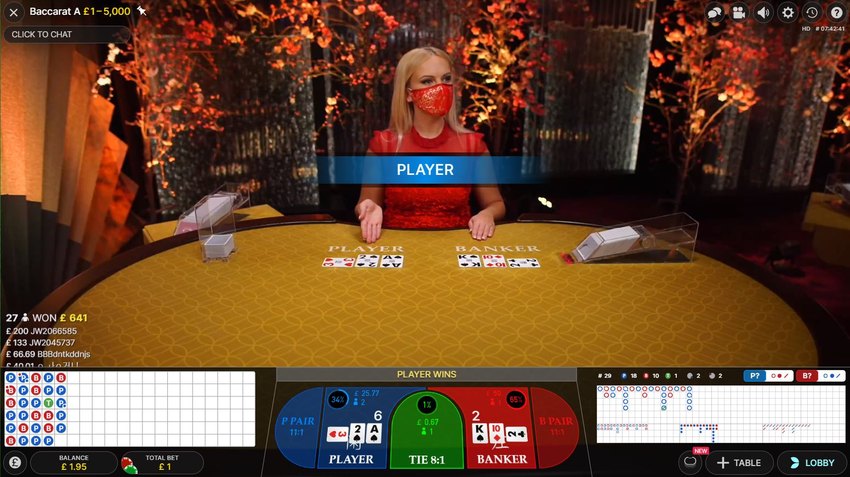 The only other things to note are the scrolling list of names and amounts of money on the left hand side of the screen, and the two results charts on either side of the betting area. The scrolling list is simply the winners from the last round and how much they won; the results charts tell you the history of the current game, including any pairs denoted by a blue or a red dot depending on whether the banker or the player got the pair – the information is the same on either side just displayed in different ways.

Everything else on the interface is to do with audio, camera angles, the chat box, etc. and have no impact on the game itself. 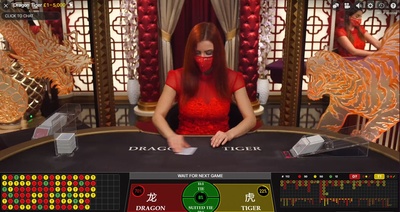 The game of baccarat is so simple it is hard to adapt too much, but the casino industry is an innovative place so they have managed it – although the changes are far from seismic.

As well as hosting multiple tables with different betting limits, you might also find variations such as speed blackjack, which uses the exact same rules but cuts down the betting time to ten seconds and doesn’t bother with the suspense of turning cards over, dealing them face up from the start.

No Commission Baccarat is a popular option for obvious reasons – betting on the banker pays out the full amount without the traditional 5% commission to the house; while the Control Squeeze variation allows players to digitally reveal their cards themselves and control suspense levels.

As you can see, the changes are mostly to do with the mechanics of how the game is played out rather than changing anything fundamental.

Dragon Tiger is another game that could be classed as a blackjack variation, although it is technically a different game. Essentially though, the dragon is the player and the tiger is the banker, and instead of drawing two cards each they only get one. The side with the highest card wins and there are also options to bet on a tie and a suited tie.

What’s the Difference Between Live and RNG Baccarat? 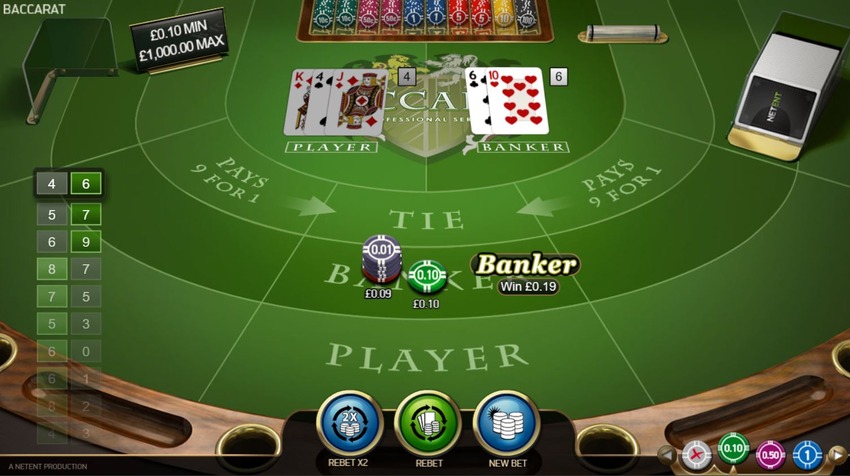 Since baccarat is a game of chance with very little input from the player, it can be much more enjoyable playing with a group of other gamblers in a live casino with the option to chat and see other players’ results. The interaction with the live dealer is very welcome at the live casino too, whereas the RNG version is purely run by a computer.

This also means that the more sceptical players out there can rest easy knowing that the game they are betting on is 100% fair, because they can see it being played out in front of them.

Even shoe changes and deck shuffling happens in front of the player at a live casino, with a member of the team standing just behind the dealer at each table, in full view of the camera, and doing their work before those cards are put back in play. 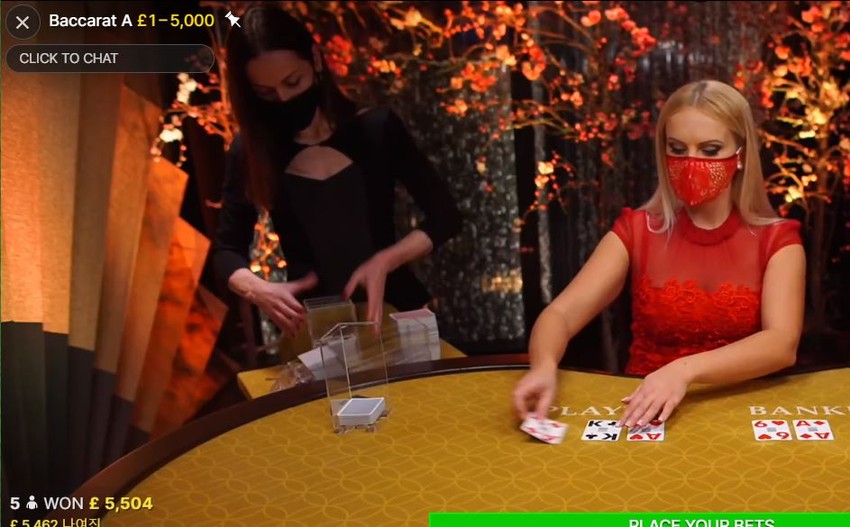 The RNG game is run by a piece of software which, although thoroughly tested and regulated for fairness, will always make some players suspicious.

Of course your speed of play is controlled by the casino when playing live, whereas an RNG game can go as fast as you can click, so if it is hands per hour you are most interested in then the RNG game will be a better option.

You won’t notice much if any difference in the rules or payouts between the two styles of play though, the game itself will function in the same way.