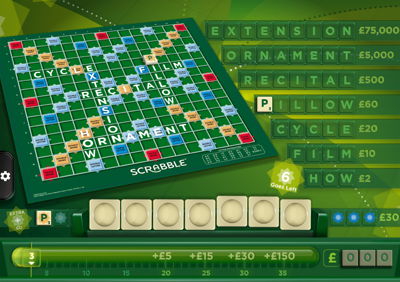 Scratch cards have been around for decades, asking the user to scratch off a panel in order to reveal a prize underneath. Given the move online for the majority of gaming companies, it’s hardly a surprise that such a popular form of gambling would also find an internet-based audience. Scratch card and instant win games come in all shapes and sizes, working in different ways.

Many of the biggest companies produce licensed games for TV shows and films, with the likes of Deal Or No Deal, Scrabble and the Ted film being good examples. The games use algorithms driven by Random Number Generators to decide on whether they’re winners or not, with companies obliged to provide a Return To Player percentage before you even click to buy your card or game.

Unsurprisingly, the National Lottery itself has made many of these game popular and now you can play a huge array of different games with various betting sites.  The question is are these games any good and are they good value?

The first thing we’ll look to explain here is how to play scratch card and instant win games. It isn’t actually as easy as it sounds to explain this, however, given that the different games have varied approaches. It’s this sense of variety that makes them so much fun to play, given that it’s not just the theme that will differ from game to game but also the playability.

Whilst the essence of both game types remains the same, how they work in practice can be quite different. The purest form of scratch card are exactly that; you buy a card that you then electronically ‘scratch’ the panels off to reveal whether it’s a winner or not. Usually you’ll be asked to line-up a series of symbols, for example, so if you get all 7s then it’s a winning card.

That’s not the only way that they work, however. Some instant win games are anything but instant, instead presenting you with a series of different stages and even games within games. Let’s look at the National Lottery’s licensed game of Monopoly, 85th Anniversary Edition to explain what we’re talking about. 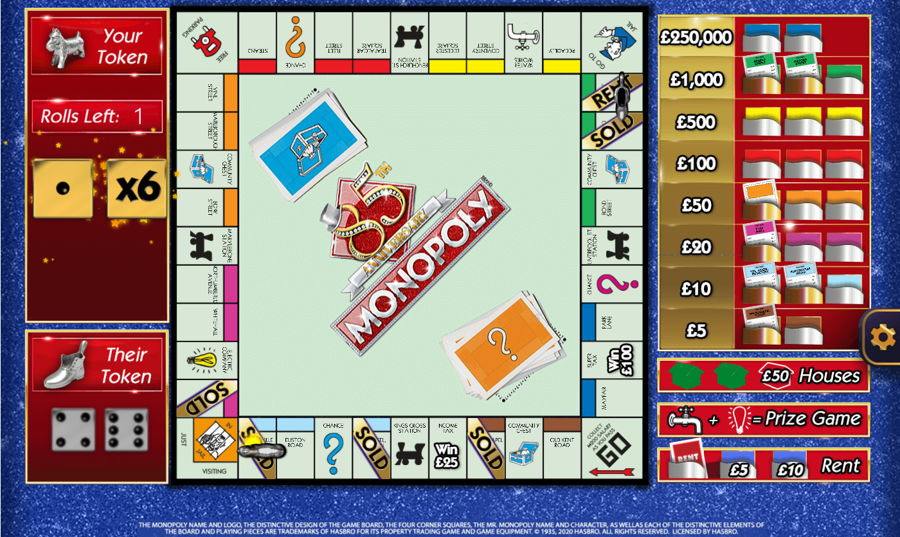 The game has been licensed by the National Lottery from Hasbro, based on the characters you find in the game of the same name. Once you’ve bought your ticket, the first thing you need to do is to choose which token you’re going to ‘play’ with. You can choose from the following well-known tokens: 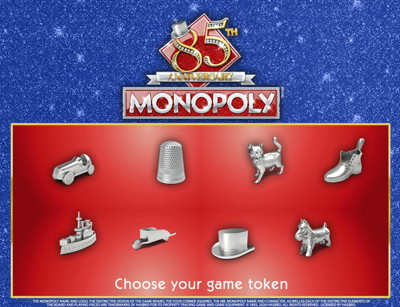 You select your token and the game begins, with both your token and the computer’s token placed on the ‘board’. You have two golden dice that you click on to see how many spaces your token is going to move, with one of the dice offering between 1 and 6 in dots and the other offering a multiplier of that. The minimum you can roll is 1, the maximum being 36.

Once you’ve ‘rolled’ the die, the token will move the allotted number of spaces around the board. If it lands on a property then you will ‘own’ that property and it will be placed into your property collection. Each set of properties has a corresponding amount of money attached that you will win if you manage to ‘collect’ all of the properties therein.

Also on the board are train stations, but unlike in the real game you can’t collect these. Instead, landing on one will take you on a train journey to another station, where you’ll get another roll for free. When you do land on a normal property you not only collect the property but also see a spinning wheel of chance that is split into three sections: 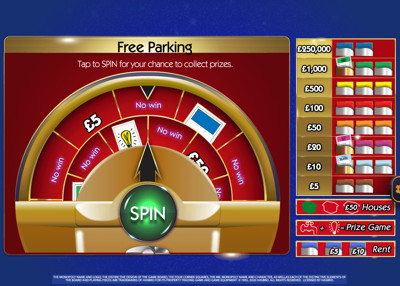 Obviously landing on End Of Turn simply means that your go is over, whilst landing on House also terminates your go but sees you collect a House token. If you get 3 of these during a game then you’ll win £50 automatically. If you land on Extra Roll then you will immediately be presenting with the opportunity to ‘roll’ the dice again.

There are numerous ‘mini games’ available within the overall Monopoly 85th Edition instant win game. A good example of this includes if you go to jail, wherein you’ll be presented with a list of different prizes that you will win if you manage to ‘roll’ a double. Prizes can range from instant cash winnings to property that is added to your collection.

Costing £5 a go, the Monopoly 85th Edition game is an impressive one in its size and scope. Whereas some games can be over quite quickly, playing this one can last for several minutes as you pick up Extra Rolls and get involved with mini games. The mini game you enter for collecting both the Waterworks and Electricity Company offers a guaranteed prize, too. 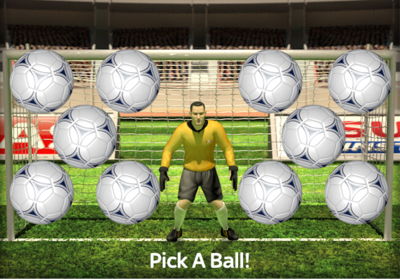 Whereas the Monopoly 85th Edition game is one that can last some time, there are numerous scratch card games that can be over much more quickly. This can be because of how quickly you ‘scratch’ the card off, but also because many offer you a ‘reveal all’ option. By clicking on that button, the entire card’s value will be revealed and you’ll be instantly told whether it’s a winner or not.

Whilst both game types work in essentially the same way, the experience of scratch cards rather than games can be a very different one. It’s far more common for scratch cards to be simplistic in their nature, removing the ability to play extra games within the game and generally just asking you to match symbols or something similar across a number of panels.

Let’s look at the League One game for an example of this. Whilst all done using computer graphics, the game could easily take a physical scratch card format that isn’t the case with the Monopoly 85th Anniversary Edition game. It presents you with four ‘games’ within the same card, starting with a ‘Score A Goal’ game on the lefthand side.

This presents users with six ‘balls’ that you need to scratch. When you do so it will reveal either the word ‘Miss’ or the world ‘Goal’. If it’s a goal then you’ll win the amount of money located in the panel above the balls. There’s another set of six balls on the other side of the game, which require you to match three values if you’re to win.

In the middle of the ‘card’, meanwhile, one game asks you to ‘scratch’ off some shirts. If you reveal the number 7 underneath a shirt then you’ll win £10. Finally, the mean part of the card is taken up with a series of Sky Bet panels, requiring you to match 3 symbols in order to win an associated prize. The game works in much the same way as a standard physical scratch card.

How The Games Work 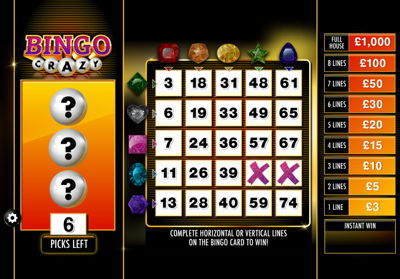 The games all work in their own way, but offer the same sort of logistics as we’ve explained elsewhere on this site for the likes of slot machines. When it comes to scratch cards, the symbols that are underneath the panels that you need to ‘scratch’ off will be decided by an algorithm driven by a Random Number Generator, once you’ve paid your money to play the game.

When it comes to instant wins games such as the Monopoly 85th Anniversary Edition, meanwhile, they work in the same sort of manner. An algorithm is employed when you buy the ticket to decide whether it’s going to be a winning game or not and things then play out accordingly. Some games have various mini-games within them, each with its own algorithms as they go along to complicate things further.

That is to say, you could buy your game and as it progresses the decisions that you make in the ‘mini-games’ and other areas of the playing experience also use RNGs to decide whether it’s going to be a winner or not. Such things aren’t determined ahead of time but rather alter as the game goes on. Even so, there is no skill involved in playing and it’s all chance.

The Illusion Of Power 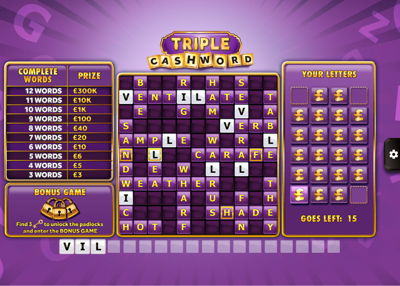 What the best games do is provide users with an illusion of power and control as they play. Once again looking at the Monopoly 85th Anniversary Edition instant win game, you’re asked to select your token before you start playing. Will the decision to play with the dog instead of the boot alter the chance you have of winning a prize?

Once the game is started, certain mini-games give you the illusion of being in control. There’s a game in which you have to decide whether the next card in a series is going to have a value that is higher or lower than the previous one. Will choosing a different option make a difference to the ultimate outcome?

The same question is worth asking about the guaranteed prize game you enter when you ‘collect’ both of the utilities. You can either play a game based on electricity or one based on water, both of which ask you to select one of three options. The selection that you make will dictate how much of a prize you win, so does your selection make a difference?

The reality is that you’re simply presented with the illusion of power during the game. The National Lottery’s rules on the matter say:

"This Game is a game of chance. The outcome of a Play in the Game is pre-determined by Camelot's Computer System at the point of purchase. You are not required to exercise any skill or judgement to win a Prize.”

In other words, the moment you buy the game the decision about whether your game will be a winner or not has already been taken. Nothing you do within the game will alter that, meaning that you’ve simply been given the feeling of being in control and actually you are not. The game does not offer a ‘Reveal All’ button, but it could do given how it works.

Each of the instant win and scratch card games that you can buy, whether they be on the National Lottery site or via an online casino, will have a Return To Player percentage attached. Sometimes this is expressed in a more simplistic form such as the odds of winning, but it amounts to the same thing.

The RTP or odds of winning are based across a large period of time, not just the immediate playing period. That is to say, if the odds were 1 in 3.00 then it wouldn’t mean that you would definitely win a prize if you bought three games. Equally it doesn’t mean that the big prize would be paid out if you paid for three games.

The Return To Player amount on Monopoly 85th Anniversary Edition is 74%, with the overall chance of winning a prize standing at 2.37. That means that if you spent £100 on plays of the game then you’d expect to receive about £74 back. It’s not that simple, however, because the 74% is based over all people who buy tickets, as is the 2.37 figure.

To give you an indication, here’s a look at some of the approximate odds for the Monopoly 85th Anniversary Edition game:

Here’s the RTP of some well-known games: