How to Play Dream Catcher Live

Created and developed by Evolution Gaming – who are probably the most famous online gaming software developer for live content - Dream Catcher is designed to appeal to slot players who might not otherwise venture into the live casino.

It works because it is both easy to play and comes with high levels of excitement, combining old school TV game show entertainment with a gambling edge, creating an intensified experience.

Filmed in a state of the art, multi-camera studio which is equipped with stunning lighting and sound effects that are auto-synchronised with real game action, players can be fully immersed in the experience as the wide angle shots switch to close ups to build suspense.

On the face of it this game is simply a case of spinning a wheel and hoping it lands in the right spot, but Evolution have done so much more with it than that.

A Guide to Playing Dream Catcher

There really isn’t a great deal to learn here, as the game is such a doddle to pick up. Nevertheless, forewarned is forearmed and all that, so let’s take you through it so that you can attempt your first bet on this game with confidence. 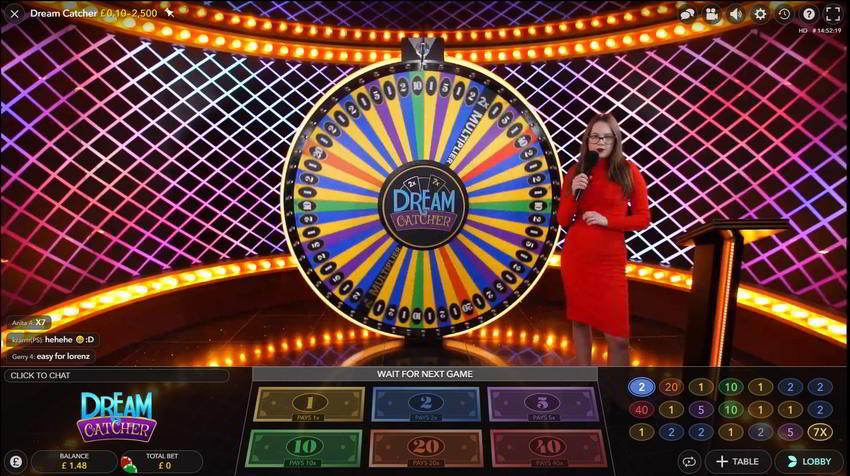 When you first load the game you will see the bright lights in the background, the multi-coloured wheel itself, and the presenter who will be chatting with all the other players. You don’t need to bet right away and each round comes and goes very quickly, so don’t feel pressured to do anything immediately, feel free to watch and take it all in.

The wheel is split into 54 segments with different numbers and colours on them:

The number represents the payout relative to the stake, which explains why there are fewer segments with the higher numbers on. For example, if you bet on the wheel landing on the number 1, you would have 23 chances of winning and your payout would be 1x your stake. If you bet on number 40 you would only have 1 chance of winning but your stake would be paid out x40.

You can set your stake level by selecting the chip size when prompted, before placing those chips on the number or numbers that you want to bet on. You can also place different stakes on different numbers, so you can play a little more tactically.

Bets close as the wheel is spun and then it is just a case of waiting for the result.

You can see all the winners scrolling down the side of the page after each spin, and you can also see the last 20 results if you want to get a broader idea of what has been happening so far. 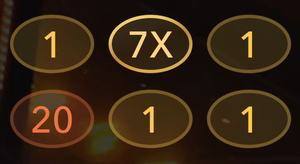 This is where the really exciting stuff happens.

Those of you with a head for maths may have already noticed that we are two segments short in our table above. That is because the remaining two segments hold the 2x and 7x multipliers.

Why is Dream Catcher Live Such a Popular Game?

As noted, simplicity is key here. Dream Catcher Live is super easy to play, and it comes with bright colours, dazzling lights, and a charismatic host – all the ingredients for a successful game show. Just ask the guys behind the old TV show Wheel of Fortune, which this bares more than a passing resemblance to.

The game is also incredibly exciting. There is something about trying to anticipate where the wheel will land as it starts to slow down that is captivating, and the fact that a nice payday could be the result also helps.

There is also scope for strategy here, and hedging is fairly common. This is where players will bet on more than one number, staking smaller amounts on the higher numbers and larger amounts on the smaller numbers as a way of trying to win more often.

Each round comes and goes very quickly as well, so there is little time to get bored. Equally, you don’t have to wait very long to get a bet on once you join the game or if you have gone to make a coffee mid-session.

It’s an easy one to market really. It looks appealing, it sounds great, and by employing the right kind of people to host the game and engage us, the audience, Evolution Gaming have ensured that never a dull moment goes by when playing Dream Catcher.

Can you Play Dream Catcher on Mobile? 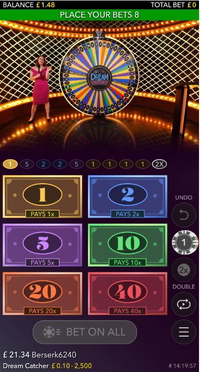 The short answer is yes you can. But is it any good?

Evolution Gaming have an extremely capable mobile development team that they use on all of their products and with mobile gaming increasing year on year this team is arguably one of the most important in the company.

They have certainly done their jobs here.

Although the layout and design look a little different on the smaller screen it is just as easy to get on board with, and the performance lacks nothing in comparison.

The visuals are sharp, the sound quality really draws you in, and the gameplay is just as exciting. It is a slightly alternative exerience but it would be difficult to pick a favourite. If you enjoy chatting with the host then it's fair to say that this is easier on the desktop version of the game, but this is a minor point really.

Assuming that your device and internet connection are both up to it, Evolution provide a level of quality to mobile customers that it’s not currently possible to beat, whether playing on iOs or Android. If you do have any issues it is much more likely to be at your end than at theirs.

It's a good game for mobile actually because what with the rounds only taking around 30 seconds or so each, you can use it as a time killer while waiting in a queue, or for the bus, or whatever.

Dream Catcher has, without a doubt, been a revelation in the online gambling world, and tas the first of Evolution’s Moneywheel series it laid the groundworks for all others that came after it, such as Monopoly Live. It has remained popular with seasoned casino players and those new to live casino for the betting flexibility, ease of use, and the exciting atmosphere it can quickly create.

While we have done our best to cover the game of Dream Catcher in as much detail as possible, we do appreciate that there might be some things that you still want to know and as such we have preempted some which we feel might be useful to you and attempted to answer them in as much detail as we possibly can below!

Where can I Play the Dream Catcher Game?

If you can find a casino that works with Evolution to power their live games, then you will be able to find and play Dream Catcher.

It won’t be a difficult task because more online casinos partner with Evolution than anyone else. You can start with our list of approved online casinos. Head straight to their Live Casino sections and you will be able to find out in a few seconds if they have the game or not

Although ultimately, this is a game that was developed by Evolution Gaming, when it comes to finding the best place to play the game, here at OnlineCasinos.org.uk we understand that everyone has different tastes when it comes to choosing an online casino. That is why the casino sites that we have recommended all tick a number of different boxes according to what different people like.

How do I Know that Dream Catcher is Fair?

Given that the game is streamed live and you can literally see the host spinning the wheel, it would be pretty tricky for anyone to cheat.

Evolution also have to abide by the regulations laid down by the UKGC who issue gambling licenses, and that includes rigorous testing for fairness of all games, so it has been signed off by the regulating body.

Still, there is a house edge depending on which number you bet on:

Is it Easy to Win Dream Catcher?

There isn’t necessarily a right or wrong answer to this, because there are a number of different variables which all have an effect on whether you win or not and if so, how much. At the end of the day though it is a game of luck.

Betting on the lower numbers will usually see you win more often but pocket smaller amounts and betting on the higher number will have the reverse effect. You may be able to find a way to spread your bets to increase your winning chances, but since the game is random there is no guarantee.