Aspers is an old respected name in the world of casino and with a fascinating history too, but they didn’t hit the internet until 2017. How is this possible? Well, for a very long time Aspers when a real world casino only, reserved for the high society and not deemed worthy of the average gambler. However, there is much more to this than meets the eye, so do read the About section below.

The website has its idiosyncrasies that will no doubt be ironed out in time, but these in no way detract from the gigantic list of games that you can play at Aspers, everything from slots to poker, and its rare to find a live casino that is as comprehensive. There are three providers powering the live casino including tables streamed from Aspers in Mayfair.

They don’t skimp on support services either with 24/7 access and all methods available, and the loyalty rewards will help your gaming sessions last that little bit longer. It's an online casino that still has a little work to do, but for one so young it is already in very good shape.

Aspers is one of those online casinos that absolutely floods its' site with games.

There are more than 1200 titles in all categories which is an astounding amount of choice. Slots are the most dominant game type, but they still have a good 30+ table games including the usual suspects plus baccarat and a few poker options, as well as the live casino which we will discuss shortly.

Novomatic seem to be the favourite slots provider, even earning their own spot on the menu bar, although only 100 or so of the slots available are developed by them. However there are plenty of other games from the likes of NetEnt, Microgaming, Playn’GO, Big Time Gaming, and IGT amongst others. That means you can find famous progressives, Megaways slots, old industry classics and brand new slots alike. There are even some exclusives.

It’s also a great place to find jackpot games as there are more than 130 of them to try, and at the other end of the scale there are more Slingo games here than you might expect to see.

In terms of content then it’s a site that is trying to be all things to all people and, video poker aside, it is largely succeeding.

It’s another notch on the bedpost for Evolution here, who provide the lion’s share of Asper’s live casino games, but they are not alone.

Aspers employ the services of not one, not two, but three live game suppliers, with NetEnt throwing in a further 20 or so blackjack and roulette tables, and Authentic Gaming providing another score of roulette tables as well as a few games streamed live from real casinos – Aspers being one of them. So you can play along with the people who are actually there.

Going back to Evolution, you can expect the usual high quality streams from copious blackjack tables, with roulette, baccarat, poker, and game show style games also on offer.

To be honest, for live casino alone Aspers is head and shoulders above most other online casinos.

There are few online casinos with as interesting a backstory as Aspers.

Although only officially in operation since 2005 when the first casino was opened in Newcastle, there are links going back to Mayfair in the 50’s when most gambling was still illegal in the UK.

The late John Aspinall, known by everyone as ‘Aspers’, ran high society gambling houses at rented flats in Mayfair, and invited the wealthy members of the upper classes to take part in games of Chemin de Fer (baccarat), making the equivalent of £300,000 from his first night alone.

Once the gambling act had come in, Aspinall opened the exclusive Clermont Club, with the founder members including five dukes, five marquesses, twenty earls, and two cabinet ministers, and it was also frequented by actor Peter Sellers, SAS founder Sir David Stirling (who once lost over £100,000 in a single night), James Bond author Ian Fleming, and artist Lucien Freud.

This was also where Aspinall became friends with the infamous Lord Lucan, who disappeared without a trace after murdering his children’s nanny in 1974. Aspinall was so close to the lord nicknamed Lucky Lucan that there are several theories that he helped him escape, and later, when Lucan tried to make contact with his children, was part of a group that had him killed.

None of this is proven of course.

What has all this got to do with Aspers Casino? Well, Aspers is jointly owned by one Damian Aspinall, John Aspinall’s son. He started the business in 2005 in memory of his father, and is responsible for the modern day version of the company, which includes the online casino. 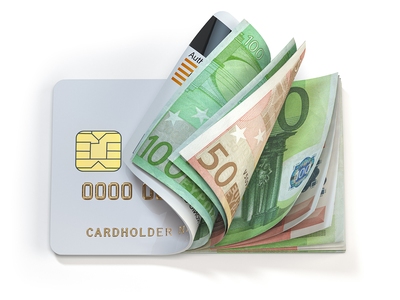 There might not be a long list of payment options yet, but there is at least one option for all types of payment excluding pay by phone.

Like a lot of other things at Aspers (other than the stellar games list), the processing times are just so-so, not slow enough to stop you playing with them but nothing to get excited about either, but the limits are fair and there are no fees which is as it should be.

The fact that Aspers keep player’s funds in a separate account and meet the requirements for Medium protection level according to the UKGC is also good news. 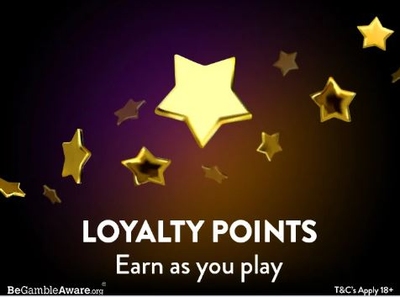 You will find regularly updated promotions on the website offering free spins as rewards and things like that, but it’s not an online casino laden with bonuses and offers.

There is a loyalty scheme though which uses the traditional system of earning points every time you play a game at the casino. As usual, the rate at which these points are earned depends on the game you play, and when you have enough of them they can be traded in for bonuses.

The bonuses can then be spent on whichever games you like, but do be aware of any wagering requirements that might be attached, as these reduce the true value of your reward points.

All in all it’s not an online casino for bargain hunters, but rewards do trickle in and they tend to be at least half decent when they do. 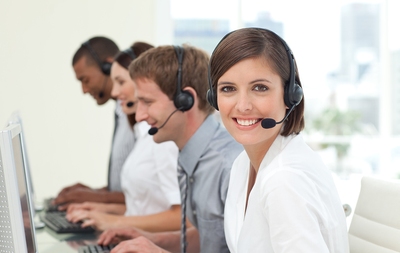 Help is on hand 24/7 at Aspers, every day of the year except for Christmas day. We can probably give them one day off a year without complaining.

The support options are very good here, with a free phone number, readily available email address, and easy to access live chat all being options for players with queries.

Rather bizarrely, their Twitter account is locked so no one can read their tweets, which isn’t ideal for marketing but there we go.

They do try and point you in the direction of the FAQ’s in the first instance but these aren’t particularly comprehensive, and they are just presented as a list you have to scroll through so it’s not all that user friendly either.

Replies to enquiries tend to be answered in a timely fashion though, so if you want our advice just skip the FAQ and get in touch with them. 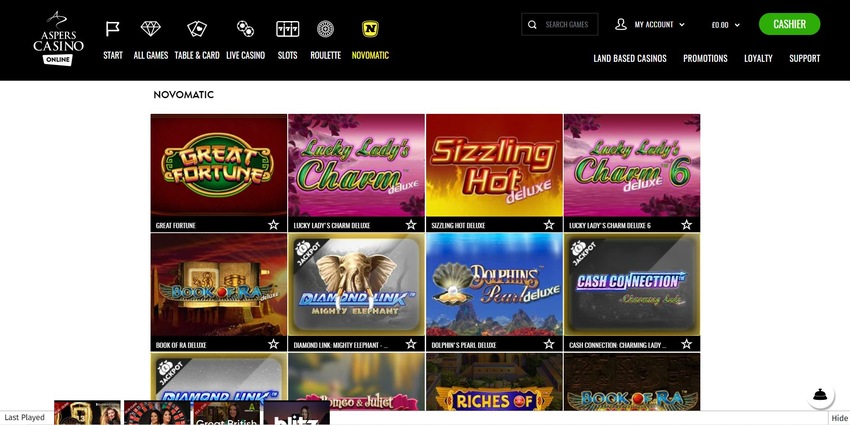 It’s something of a mixed bag when reviewing the website itself. Stripping back everything else and just looking at functionality you are left with a site that is well designed from a practical point of view, but doesn’t seem to have enough gas in the tank.

Plainly speaking, it needs to be quicker. It’s certainly serviceable but it’s lagging behind many other online casinos just in terms of load speeds and performance. This won’t affect the games themselves, they all play fine and experience no performance issues, but using the interface and switching between game categories feels lethargic.

It looks good though, with a simple black and white colour scheme that lets the games do the talking and neatly separates the various sections of each page. 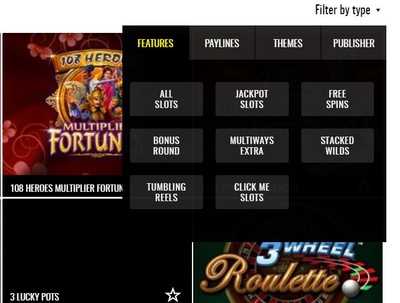 You won’t get lost on this site, it’s very user friendly when it comes to jumping between game types or going to the cashier, managing your account and things like that.

The way in which games are found is a little disorganised though.

Depending on where you are on the site, you will have different browsing/game filtering options. At its best they operate a great system, but that makes it so frustrating when those options aren’t there.

For example, if you log in and go to the All Games page from the menu bar, you can filter by game features, paylines, themes, and publisher (although they aren’t all there as options). This is great, it means you can find the sorts of games that you prefer to play.

But when you to the Slots page these options no longer exist, there is a totally different and less effective system in place.

Still, you can create your own list of favourites and there is a search bar so you can easily locate a specific game provided you know what you are looking for. 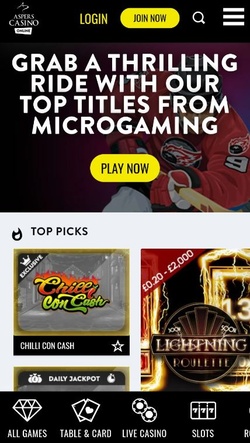 The fact that Aspers have an app even though they only hit the internet in 2017 shows you that they have resources and aren’t afraid to invest them.

However, they should probably invest a bit more to stop it crashing every ten seconds. During our test it was completely unusable despite looking the business.

A good job then that there is a version of the site optimised for mobile browsers.

It looks exactly the same except it also, you know, works - albeit quite slowly. The performance really does need improving if they hope to keep mobile customers happy. The loading speeds at times would have even been annoying back in 2002, but today’s consumer just won’t put up with it.

Leaving that aside, and the build of the mobile site is pretty good. It’s very clean and easy to use, it closely resembles the desktop site too so you will instantly know where everything is, and there is very little difference in game availability.

The ‘favouriting’ system comes into its own here because with such an extensive selection and limited filtering options, scrolling is the only option, so building a list of favourite games saves shed loads of time.

Aspers have the potential to do so much better with their mobile capabilities, it’s all set up, it just needs a little more attention.

Not many online casinos have physical locations as well, but Aspers is one of the few that do. They opened their first in Newcastle in 2005, another in Northampton in 2008, followed by a third in Westfield Stratford City in 2011 and finally one in Milton Keynes in 2013.

There is also a casino called Crown London Aspinalls, commonly referred to as Aspers, in Mayfair. This is a luxury casino with historical links to the online casino but is not run by the same company.

Aspers casinos are known for being lively and fun, smart, stylish and relaxed, which also applies to their dress code. Their modern approach and high end service including restaurants, live sport, and entertainment, appeals to the 21st century generation who want the best experiences without having to dress up too much.

The real world casinos have their own rewards/VIP system in place known as Aspers World, but this does not link with the online casino, sadly.