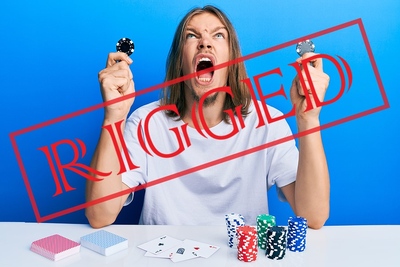 It’s probably the most frequently debated question in online gambling, and one that attracts strong opinions on both sides of the fence.

For someone who has gone a long time without a win worth withdrawing it might feel increasingly likely that they are being taken for a ride, and the tin foil hats come out; for others who feel less aggrieved it is a simple case of understanding how RTPs work alongside variance and volatility.

Of course, if you are playing at an unlicensed or ‘black market’ online casino then you may well be having your money siphoned away with no real chance of winning, but these untrustworthy casinos are run by criminals so the debate on whether or not online casinos are rigged doesn’t really apply to them – of course they are.

In this article, we are only talking about genuine casinos that have been licensed by the UKGC, and we’re going to explore why players sometimes believe that an online casino is rigged, as well as why they not only can’t be, but it’s not even in their interests. 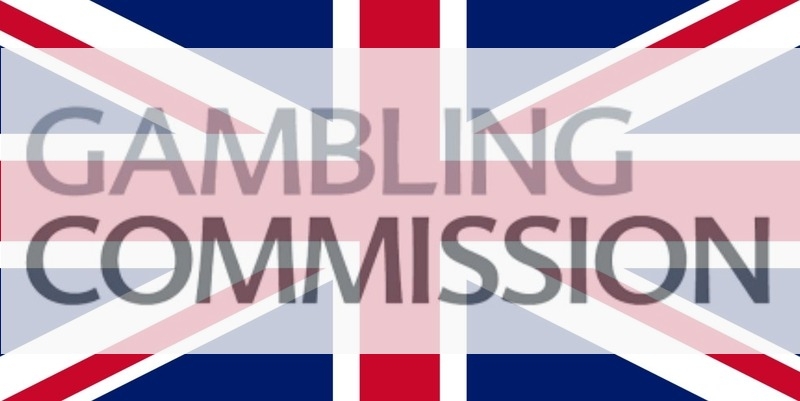 Ultimately, and still unbeknownst to a surprising number of players, the vast majority of online casinos are licensed by their relevant governing body such as the UKGC (United Kingdom Gambling Commission), which means that they are required by law to follow a set of legislation set out by that regulator. There are other reputable licensing bodies that you might see as well, such as the MGA (Malta Gaming Authority) and the GGC (Gibraltar Gambling Commission), with some sites being licensed by two or even three regulators depending on the territories that they operate in.

It's effectively permission granted to trade in certain countries so long as they stick to that country’s rules. Think of it like a more complicated and official version of the swimming pool rules; you can come in for a swim but no dive bombing, no splashing, no eating/drinking, and no courting.

The regulator is like the life guard sat on the big high chair. Every regulator is responsible for constantly monitoring all of the sites under their purview on a regular basis, checking for infractions and bad behaviour, which means that online casinos have to make sure that everything they do strictly complies to these regulations.

The checks are regular and cover everything including the security of the site to make sure that player’s details are kept private, the promotions that they are putting out to ensure they are clear, fair and not exploitative, and also the slots and games that are on offer to ensure they don’t break compliance rules. They also respond to complaints about a casino, such as a customer being allowed to log in and gamble after having requested self-exclusion, for example.

Regulators also monitor software providers because these play a crucial part in the business model of an online casino, due to the fact that they supply the actual games and slots. This means that casino brands who operate online need to make sure that their chosen software providers are regulated by the relevant industry body.

Any operator or software provider found to be breaking the rules can have huge fines issued, extra demands/conditions placed on their license, or in extreme circumstances their licenses can be suspended and even taken away. Without a license, the company is basically finished so it is a big deal.

Why Would a Casino Cheat? 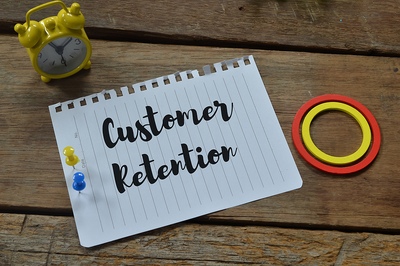 Knowing all of the above, you can see that it really makes no sense for a licensed casino or software provider to try and squeeze extra money out of their customers dishonestly. The risks are too great, and the UKGC in particular is making an example of anyone who does break the rules – especially when it comes to customer safety and responsible gambling – with bank balance busting fines.

On top of this though, a casino needs its’ customers to keep coming back. These businesses are in it for the long term, and they are difficult to set up; an online casino is not a market stall that can be thrown up to make a quick buck over the weekend, it takes a lot of work and investment to get off the ground.

Once they have gone through all that hassle they need to retain customers so they receive a steady income over the years. It makes far more business sense to take steady smaller amounts from a customer over 10 years than it does to fleece them every time they show up and have them get fed up and never come back.

Imagine two people both depositing £50 a week, but whereas one loses £30 on average and also enjoys some wins, the other loses everything because the casino is ripping them off. After a year of no wins the second player gives up and closes their account.

If you are a casino you would prefer the steady income of the first player because you retain them as a customer and they are worth more over the years. Even if they only lost £10 a week they would be worth £5,200 over the ten years. You also don’t need to spend money replacing that customer because they keep coming back.

If you are still not convinced, then remember, all casino games are weighted in the casino’s favour. The casino has an edge over the player in every single game they offer (although if you are interested in reducing that edge you can read this), so they literally can’t lose over the long term. It’s the perfect business model, and risking everything to boost already healthy profit margins makes absolutely no sense for any legitimate business.

In every situation when gambling, the odds are against the gambler. This is the nature of the business; indeed it is the very reason the business can exist – casinos wouldn’t trade if they didn’t make a profit, the same as any company in any other sector. This makes casino games inherently ‘unfair’ in one sense, because you have more chance of losing than of winning, but the reason for that should understandable. This aside, online casino games are 100% fair, and here’s why.

All slots and games that have been developed are programmed with complex mathematical algorithms built in, which apply the necessary equations in different instances.

This mechanic is known as the Random Number Generator (RNG), and it is responsible for sequencing random results while also balancing the game’s overall return to player percentage (RTP). Every casino game that you can find at an online casino has an RTP percentage which is the rate at which a slot will payout. As such, it gives the player a good indication of how often they can expect to win.

This is also how the house gets its’ edge. A higher RTP means a lower house edge, which means the game favours the casino only slightly more than the player. For example, a slot with an RTP of 96% would therefore have a house edge of 4%. Put another way, for every £100 put through that slot, it will keep £4 and pay out the rest.

What makes this more complicated is the volatility; some games pay out little and often, others pay out bigger amounts but less frequently. An extreme example would be a game with an RTP of 96% that took £1 million but only paid out once, with one lucky player winning £40k. This would never happen (ridiculously high volatility) but it gives you the idea.

Lastly, variance comes into play. Because the RTP is calculated over millions of test spins before the game is released, no single player will experience the true RTP. Someone could win big on their first spin, someone else could spin a thousand times and have no big wins at all. That’s variance. And this is probably the main reason that some players become convinced the whole thing is rigged. Actually, what is happening is that the first player just got lucky with the RNG and took a bunch of money that other players had lost. That’s the gamble – it’s just a more complicated and entertaining version of the national lottery in a way.

So in the end, every player has the same chance of winning on every spin or every hand they play on an online casino game. This makes them fair. How high that chance is depends on the game in question and the mathematical model it is built on, and who actually ends up winning is completely down to luck.

How to Check That an Online Casino is not Rigged

In recent times, there has been a considerable crackdown on fraudulent activity concerning online casinos. Regulators are taking more action than ever before, even against minor infractions, in their position of protecting players and ensuring fair play.

As a result, operators are upping their game to make sure they don’t get a slap on the wrist, so online casino has never been a safer place to play. Dodgy dealers do still exist though, even though they are less common than they used to be.

Ultimately, as the player you need to take some responsibility for where you play, and there are a number of things that you can do to make sure that every site you are playing at is legitimate. 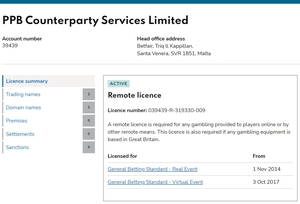 One of the easiest ways of doing this is to scroll down to the bottom of site that you favour and look for the logo of the UKGC to make sure they are licensed.

While in theory, it is easy for any casino site to put a relevant regulator’s logo on their site, the fact is that regulators monitor gambling sites on a regular basis, and if they do come across a site that claims to be licensed by them, but isn’t, they will act.

Still, it pays to be careful so you should always clock the link and make sure it takes you to the casinos license page on the UKGC website. You can also go here and search manually for a company you are interested in playing with.

If they aren’t on the site then they don’t have a license, and not only should you refuse to play there, you could help other people by alerting the UKGC too. 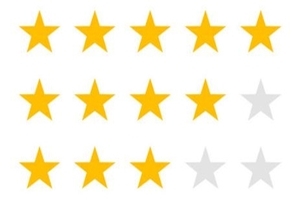 One of the best ways of finding an online casino that isn’t rigged is by asking for recommendations from people who you know, because word of mouth is the best sort of recommendation.

You can also check review sites and online forums and you will quickly become aware of which sites are reputable.

Do note though, that it isn’t uncommon for angry gamblers to write bad reviews of a site simply because they have lost money, so review sites ratings can be biased against a fair casino in some cases. Online forums are more difficult to manipulate because they are made up of gamblers like you and me, and an unfair comment will usually be challenged by another member of the community. 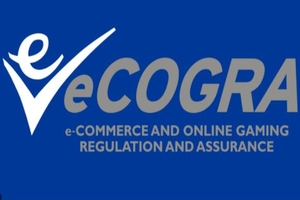 As well as being monitored by industry regulators, online casinos are also watched closely by testing agencies, such as eCOGRA.

What these companies do is test the fairness of the games to make sure that there is no suspicious irregularity. It’s an added layer of security after any in house testing, or you could think of it as quality control. These are independent companies with their own financial backing, which means they are not susceptible to any bribes.

The casino may also link to companies like IBAS who exist to settle disputes between players and casinos. This is a good sign because it means they are helping disgruntled players to make challenges on their conduct should they want to – essentially helping players to complain.